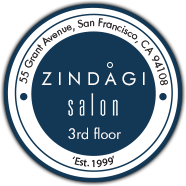 Zindagi Salon was established in 1999, anchored in the heart of Union Square. Over the years, the ownership and location has changed but the original values and essence have remained constant and true. Owner Erik Webb has been an anchor in the San Francisco hair industry for decades.

What you will find at Zindagi Salon doesn’t stop there. There is a strong dedication to be the best, and to share in a great experience with their clients, keeping happy customers coming back! Get to know our stylists and see how easy it is to make a reservation online for a new YOU today!

Erik has a purpose in style. Not only is he the salon industry’s fabulous owner of Zindagi Salon, he has entrenched himself in the Heart of San Francisco’s salon and fashion scene since 1988. As a hair artist or hair artistry expert, Erik has teamed up with other industry All Stars to launch ‘Architects and Heroes’. A brand that had flourished into various locations across California.

Following another stop, Erik arrived to join the Zindagi team in 2003. Erik has that spark that keeps his finger on the pulse of where Hair, Style and Fashion Creative meet. Not only is he no stranger to, but is graciously welcomed by the Fashion Industry from SF to Los Angeles to New York and even Paris Fashion Week. Gracing the progressive and luxurious designs by fashion artists such as Costello Tagliapietra, Daryl K., Iman’s protégé MataanoMataano, FahrdFosté and many more. In doing so, Erik could be found styling alongside the greatest of the world’s top designers from Gianni Versace to Jean-Paul Gaultier.

Erik’s star allure doesn’t stop there, with his creative eye and ability to engage with interest in others, he has worked with such celebrities as Tyra Banks, Yoko Ono, Veronica Webb, Pat Cleveland and countless others. Coming into 20 years, Erik’s hair artistry extraordinaire has become a well-known fabulous accessory to Zindagi.  And to our luck, we not only get to see his genius daily, but for local Bay Area residents and traveling tourists, many have access to Erik’s talent and touch on transformation. To such a degree, Oprah chose to feature a story in 2012 in O Magazine…noting his work appearing in magazines, film, and television was too hard to ignore. Book a session with Erik now and see for yourself.